Let’s return to the Big Match. Two doors finally open and the fans pour through the turnstiles. Now we may expect an equal number of people to pass through the two entrances as shown in Figure 2.8 but in reality this will not happen. Someone will have trouble finding their ticket; friends will wait for each other; cash will be offered instead of a ticket; someone will try to get back out through the gate to reach another section of the stadium. As we can imagine, the streams of people may be equal over an hour but second by second random fluctuations will occur. 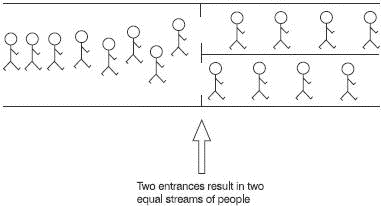 Figure 2.8 The fans enter the stadium

Electrons don’t lose their tickets but random effects like temperature, voltage and interactions between adjacent electrons have a very similar effect.

A single current of, say, 1 A can be split into two currents of 0.5 A when measured over the long-term, but when examined carefully, each will contain random fluctuations. This type of electrical noise is called partition noise or partition effect. The overall effect is similar to the thermal noise and, between them, would cause too much noise and hence would rule out the use of a 10-digit system.