Comprehensive Real-World Guidance for Every Embedded Developer and Engineer

This book brings together indispensable knowledge for building efficient, high-value, Linux-based embedded products: information that has never been assembled in one place before. Drawing on years of experience as an embedded Linux consultant and field application engineer, Christopher Hallinan offers solutions for the specific technical issues you're most likely to face, demonstrates how to build an effective embedded Linux environment, and shows how to use it as productively as possible.

• Understand the details of the Linux kernel initialization process

• Learn about the special role of bootloaders in embedded Linux systems, with specific emphasis on U-Boot

• Learn many tips and techniques for debugging within the Linux kernel

• Maximize your productivity in cross-development environments

Figure 9-1 shows the relationship between partitions and file systems. 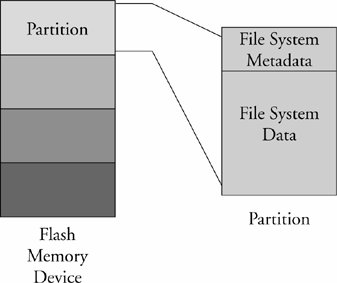 Linux uses a utility called fdisk to manipulate partitions on block devices. A recent fdisk utility found on many Linux distributions has knowledge of more than 90 different partition types. In practice, only a few are commonly used on Linux systems. Some common partition types include Linux, FAT32, and Linux Swap.

Listing 9-1 displays the output of the fdisk utility targeting a CompactFlash device connected to a USB port. On this particular target system, the USB subsystem assigned the CompactFlash physical device to the device node /dev/sdb.

For this discussion, we have created four partitions on the device using the fdisk utility. One of them is marked bootable, as indicated by the asterisk in the column labeled Boot. This is simply the setting of a flag in the data structure that represents the partition table on the device. As you can see from the listing, the logical unit of storage used by fdisk is a cylinder.[69] On this device, a cylinder contains 64KB. On the other hand, Linux represents the smallest unit of storage as a logical block. You can deduce from this listing that a block is a unit of 1024 bytes.