What is a Normal? Well, the Normal of a polygon is a perpendicular vector from the face of the polygon. The direction of this vector is determined by the order in which the vertices were defined. Fig 7.4 below, shows the normal for a polygon, the vertices have been defined in a clockwise direction. The Normal of a vertex is usually the average of each of the normals of each polygon that shares that vertex. Fig 7.5 below shows the cross section of four polygons and their normals (light red). It also shows the normals for each of the three vertices (red). Normals are used for a number of things but for this tutorial we will use them for light shading. 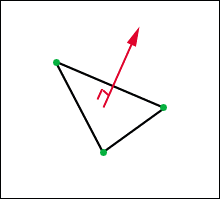 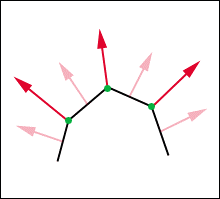