Under the Hood: Application and Deployment Manifests

Under the Hood: Application and Deployment Manifests

When you use the Publish Wizard to publish your application using ClickOnce, Visual Studio 2008 publishes your application to the URL that you have indicated. For example, if you specified http://localhost/PhotoViwer/ as the publishing directory and your web publishing directory is C:Inetpubwwwroot, then the virtual directory PhotoViewer will be mapped to the local path C:InetpubwwwrootPhotoViewer.

Two types of files will be created under the C:InetpubwwwrootPhotoViewer directory:

The next two sections take a closer look at these two types of files.

When you publish your application, three files and a folder are created in the publishing directory (see Figure 16-30):

? A publish.htm web page — This contains instructions on how to install the application.

? setup.exe — A setup application that installs the application onto the target computer.

The Application Files folder contains the various versions of the application that have been published (see Figure 16-31). 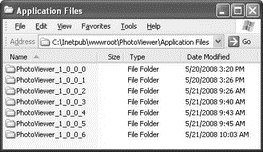 When you republish your application using ClickOnce, the content of PhotoViewer.application, publish.htm, and setup.exe are modified, and one new application manifest is created inside a new folder (for instance, PhotoViewer_1_0_0_6; located within the Application Files folder), containing the new version of deployment files, will be created.

As mentioned, the PhotoViewer.application application manifest is an XML file that contains detailed information about the current application as well as its version number. It allows the client to know if he needs to update his application.

The deployment manifest — PhotoViewer.exe.manifest, in this example — is located in the C:InetpubwwwrootPhotoViewerApplication FilesPhotoViewer_1_0_0_6 directory (assuming that the latest version published is 1.0.0.6; see Figure 16-32). It contains detailed information about the application (such as dependencies and attached files).

The PhotoViewer.exe.deploy file is the executable of your application. Other files in the same directory may include files/databases used by your application. During installation these files will be deployed (downloaded) onto the user's machine.

Where Are the Files Installed Locally?

Generally, application files are stored in subdirectories under the C:Documents and Settings<User Name>Local SettingsApps2.0 folder. To find this directory programmatically during runtime, use the following code snippet: