Structure of an Assembly

Structure of an Assembly

An assembly consists of the following four parts (see Figure 15-1).

Physically, all four parts can reside in one physical file, or some parts of an assembly can be stored other modules. A module can contain type metadata and IL code, but it does not contain assembly metadata. Hence, a module cannot be deployed by itself; it must be combined with an assembly to be used. Figure 15-2 shows part of an assembly stored in two modules. 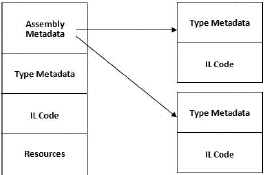