Let's explore the concept of interface inheritance by using the hierarchy of various classes defined earlier in the chapter, starting from the root class Shape, with the Circle and Rectangle classes inheriting from it (the Square class in turn inherits from the Rectangle class), as Figure 6-8 shows. 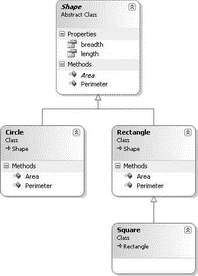 One problem with this class hierarchy is that for the Circle class, using the inherited length property to represent the diameter is a bit awkward. Likewise, for the Square class the width property should not be visible because the length and width of a square are the same. Hence, these classes could be better rearranged.

You can use interfaces to redefine the existing classes, as shown in Figure 6-9. 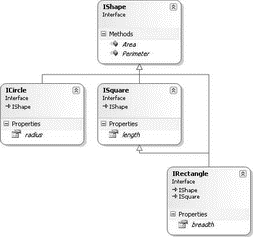 Remember, an interface simply defines the members in a class; it does not contain any implementation. Also, there is no modifier (like virtual or abstract) prefixing the function members here, so you need not worry about the implementation of the Perimeter() and Area() methods — they could be implemented by other derived classes.

The ICircle interface inherits from the IShape interface and defines an additional radius property:

The ISquare interface inherits from the IShape interface and defines an additional length property:

The IRectangle interface inherits from both the IShape and ISquare interfaces. In addition, it also defines a width property:

So what does the implementation of these interfaces look like? First, implement the ISquare interface, like this:

Here, you provide the implementation for the length property as well as the two methods — Perimeter() and Area().

You not need to implement the IShape class because you can't provide any meaningful implementation of the Area() and Perimeter() methods here.

If you implement the IRectangle interface directly (without inheriting from the Square class, you need to provide the implementation of the length property as well as the methods Perimeter() and Area().

The last implementation is the ICircle interface, for which you will implement the radius property as well as the Perimeter() and Area() methods:

Figure 6-10 shows the classes that you have implemented for these three interfaces. 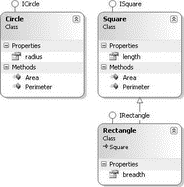