The other part of the file service is the directory service, which provides operations for creating and deleting directories, naming and renaming files, and moving them from one directory to another. The nature of the directory service does not depend on whether individual files are transferred in their entirety or accessed remotely.

The directory service defines some alphabet and syntax for composing file (and directory) names. File names can typically be from 1 to some maximum number of letters, numbers, and certain special characters. Some systems divide file names into two parts, usually separated by a period, such as prog.c for a C program or man.txt for a text file. The second part of the name, called the file extension, identifies the file type. Other systems use an explicit attribute for this purpose, instead of tacking an extension onto the name.

After the link from A to B is removed, B 's reference count is reduced from 2 to 1, which on paper is fine. However, B is now Unreachable from the root of the file system (A). The three directories, B, D, and E, and all their files are effectively orphans.

This problem exists in centralized systems as well, but it is more serious in distributed ones. If everything is on one machine, it is possible, albeit somewhat expensive, to discover orphaned directories, because all the information is in one place. All file activity can be stopped and the graph traversed starting at the root, marking all reachable directories. At the end of this process, all unmarked directories are known to be Unreachable. In a distributed system, multiple machines are involved and all activity cannot be stopped, so getting a "snapshot" is difficult, if not impossible.

A key issue in the design of any distributed file system is whether or not all machines (and processes) should have exactly the same view of the directory hierarchy. As an example of what we mean by this remark, consider Fig. 5-3. In Fig. 5-3(a) we show two file servers, each holding three directories and some files. In Fig. 5-3(b) we have a system in which all clients (and other machines) have the same view of the distributed file system. If the path /D/E/x is valid on one machine, it is valid on all of them. 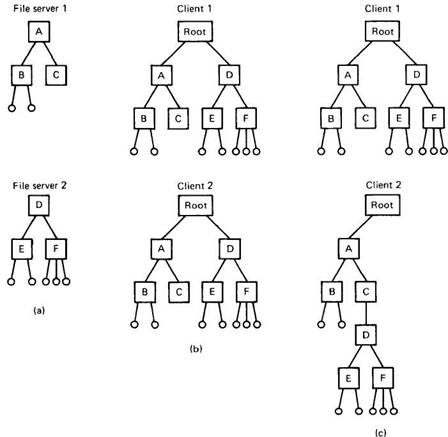 In contrast, in Fig. 5-3(c), different machines can have different views of the file system. To repeat the preceding example, the path /D/E/x might well be valid on client 1 but not on client 2. In systems that manage multiple file servers by remote mounting, Fig. 5-3(c) is the norm. It is flexible and straightforward to implement, but it has the disadvantage of not making the entire system behave like a single old-fashioned timesharing system. In a timesharing system, the file system looks the same to any process [i.e., the model of Fig. 5-3(b)]. This property makes a system easier to program and understand.

A closely related question is whether or not there is a global root directory, which all machines recognize as the root. One way to have a global root directory is to have this root contain one entry for each server and nothing else. Under these circumstances, paths take the form /server/path, which has its own disadvantages, but at least is the same everywhere in the system.

The principal problem with this form of naming is that it is not fully transparent. Two forms of transparency are relevant in this context and are worth distinguishing. The first one, location transparency, means that the path name gives no hint as to where the file (or other object) is located. A path like /server1/dir1/dir2/x tells everyone that x is located on server 1, but it does not tell where that server is located. The server is free to move anywhere it wants to in the network without the path name having to be changed. Thus this system has location transparency.

However, suppose that file x is extremely large and space is tight on server 1. Furthermore, suppose that there is plenty of room on server 2. The system might well like to move x to server 2 automatically. Unfortunately, when the first component of all path names is the server, the system cannot move the file to the other server automatically, even if dir1 and dir2 exist on both servers. The problem is that moving the file automatically changes its path name from /server1/dir1/dir2/x to /server2/dir1/dir2/x. Programs that have the former string built into them will cease to work if the path changes. A system in which files can be moved without their names changing is said to have location independence. A distributed system that embeds machine or server names in path names clearly is not location independent. One based on remote mounting is not either, since it is not possible to move a file from one file group (the unit of mounting) to another and still be able to use the old path name. Location independence is not easy to achieve, but it is a desirable property to have in a distributed system.

To summarize what we have said earlier, there are three common approaches to file and directory naming in a distributed system:

3. A single name space that looks the same on all machines.

The first two are easy to implement, especially as a way to connect up existing systems that were not designed for distributed use. The latter is difficult and requires careful design, but it is needed if the goal of making the distributed system act like a single computer is to be achieved.

Most distributed systems use some form of two-level naming. Files (and other objects) have symbolic names such as prog.c, for use by people, but they can also have internal, binary names for use by the system itself. what directories in fact really do is provide a mapping between these two naming levels. It is convenient for people and programs to use symbolic (ASCII) names, but for use within the system itself, these names are too long and cumbersome. Thus when a user opens a file or otherwise references a symbolic name, the system immediately looks up the symbolic name in the appropriate directory to get the binary name that will be used to locate the file. Sometimes the binary names are visible to the users and sometimes they are not.

The nature of the binary name varies considerably from system to system. In a system consisting of multiple file servers, each of which is self-contained (i.e., does not hold any references to directories or files on other file servers), the binary name can just be a local i-node number, as in UNIX.

A more general naming scheme is to have the binary name indicate both a server and a specific file on that server. This approach allows a directory on one server to hold a file on a different server. An alternative way to do the same thing that is sometimes preferred is to use a symbolic link. A symbolic link is a directory entry that maps onto a (server, file name) string, which can be looked up on the server named to find the binary name. The symbolic link itself is just a path name.

Yet another idea is to use capabilities as the binary names. In this method, looking up an ASCII name yields a capability, which can take one of many forms. For example, it can contain a physical or logical machine number or network address of the appropriate server, as well as a number indicating which specific file is required. A physical address can be used to send a message to the server without further interpretation. A logical address can be located either by broadcasting or by looking it up on a name server.

One last twist that is sometimes present in a distributed system but rarely in a centralized one is the possibility of looking up an ASCII name and getting not one but several binary names (i-nodes, capabilities, or something else). These would typically represent the original file and all its backups. Armed with multiple binary names, it is then possible to try to locate one of the corresponding files, and if that one is unavailable for any reason, to try one of the others. This method provides a degree of fault tolerance through redundancy.