Sprucing Up Your Home

Sprucing Up Your Home

App widgets are simply user interface elements added to the home screen. Previous Android editions had some of these (the analog clock, the Google search bar), but they were fixed in type and number. Now, not only does Android add in a couple of more app widgets (e.g., media player, picture frame), but users can add and remove app widgets, and developers can create their own (see Figure A-2). 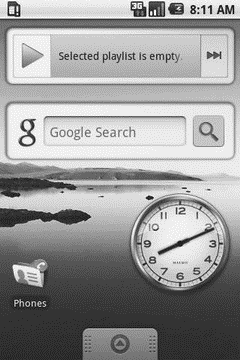 App widgets are built not using ordinary layouts, but rather with a layout subset known as RemoteViews. You cannot use arbitrary widgets with RemoteViews, though it supports many common ones. The term “remote views” comes from the fact that while the UI is defined by your application, the UI (in the form of the “app widget”) runs in the context of another application, in this case the home screen.

Implementing an app widget involves creating some XML metadata, associating that metadata with a <receiver> element in your manifest, and implementing that receiver as an AppWidgetProvider. Most likely in conjunction with a service that will handle any time-consuming work (e.g., network lookups), your provider will create and push out RemoteViews when requested by the home screen. Note that app widgets are designed for infrequent update, since frequent polling for new widget contents can rapidly drain the device battery.

Live folders are, in essence, a simplified home-screen-launched look into the contents published by a ContentProvider. In the screenshot shown previously, you see a “Phones” icon. Tapping that brings up a dialog over the home screen containing a list of all contacts containing phone numbers as you can see in Figure A-3. 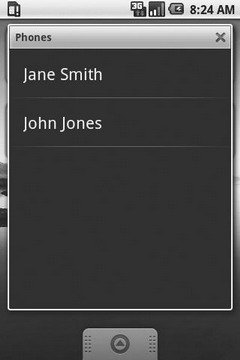 To create your own live folders for your users to offer, you can add an intent filter watching for a CREATE_LIVE_FOLDER Intent on an activity in your application. That activity, in turn, simply calls setResult() with another Intent object, this one describing the live folder, such as its icon, name, and display mode (e.g., LiveFolders.DISPLAY_MODE_LIST). This Intent also contains the Uri pointing to the ContentProvider whose information you are trying to display. That ContentProvider should be updated to recognize the live folder Uri and, on query(), return an ID, title, and description of each piece of content in the provider (or a subset if appropriate). Android will take care of the rest, in terms of formatting the data in the live folder convention (large font title, small font description), pouring the query results into a list, etc.