For this chapter, the discussion is restricted to the first two categories — Pocket PCs and Smartphones. (The latter two categories use a different shell and are not widely used in today's market.)

The latest version of the Windows Mobile platform at the time of writing is Windows Mobile 6.1. With this new release, there are some new naming conventions. Here's a list of the Pocket PC and Smartphone names used by Microsoft over the years. 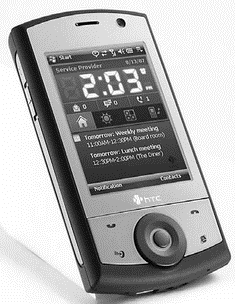 Devices that do not support touch screens are now known as Windows Mobile 6 Standard (previously Smartphones). One is the Moto Q9h, shown in Figure 18-3.