This is a small theoretical scenario where we want a NAT server between 2 different networks and an Internet connection. What we want to do is to connect 2 networks to each other, and both networks should have access to each other and the Internet. We will discuss the hardware questions you should take into consideration, as well as other theory you should think about before actually starting to implement the NAT machine.

What is needed to build a NAT machine

Before we discuss anything further, we should start by looking at what kind of hardware is needed to build a Linux machine doing NAT. For most smaller networks, this should be no problem, but if you are starting to look at larger networks, it can actually become one. The biggest problem with NAT is that it eats resources quite fast. For a small private network with possibly 1-10 users, a 486 with 32 MB of ram will do more than enough. However, if you are starting to get up around 100 or more users, you should start considering what kind of hardware you should look at. Of course, it is also a good idea to consider bandwidth usage, and how many connections will be open at the same time. Generally, spare computers will do very well however, and this is one of the big pros of using a Linux based firewall. You can use old scrap hardware that you have left over, and hence the firewall will be very cheap in comparison to other firewalls.

You will also need to consider network cards. How many separate networks will connect to your NAT/filter machine? Most of the time it is simply enough to connect one network to an Internet connection. If you connect to the Internet via ethernet, you should generally have 2 ethernet cards, etcetera. It can be a good idea to choose 10/100 mbit/s network cards of relatively good brands for this for scalability, but most any kinds of cards will do as long as they have drivers in the Linux kernel. A note on this matter: avoid using or getting network cards that don't have drivers actually in the Linux kernel distribution. I have on several occasions found network cards/brands that have separately distributed drivers on discs that work dismally. They are generally not very well maintained, and if you get them to work on your kernel of choice to begin with, the chance that they will actually work on the next major Linux kernel upgrade is very small. This will most of the time mean that you may have to get a little bit more costly network cards, but in the end it is worth it.

As a note, if you are going to build your firewall on really old hardware, it is suggested that you at least try to use PCI buses or better as far as possible. First of all, the network cards will hopefully be possible to use in the future when you upgrade. Also, ISA buses are extremely slow and heavy on the CPU usage. This means that putting a lot of load onto ISA network cards can next to kill your machine.

Finally, one thing more to consider is how much memory you put into the NAT/firewall machine. It is a good idea to put in at least more than 64 MB of memory if possible, even if it is possible run it on 32MB of memory. NAT isn't extremely huge on memory consumption, but it may be wise to add as much as possible just in case you will get more traffic than expected.

As you can see, there is quite a lot to think about when it comes to hardware. But, to be completely honest, in most cases you don't need to think about these points at all, unless you are building a NAT machine for a large network or company. Most home users need not think about this, but may more or less use whatever hardware they have handy. There are no complete comparisons and tests on this topic, but you should fare rather well with just a little bit of common sense.

This should look fairly simple, however, it may be harder than you originally thought in large networks. In general, the NAT machine should be placed on the perimeter of the network, just like any filtering machine out there. This, most of the time, means that the NAT and filtering machines are the same machine, of course. Also worth a thought, if you have very large networks, it may be worth splitting the network into smaller networks and assign a NAT/filtering machine for each of these networks. Since NAT takes quite a lot of processing power, this will definitely help keep round trip time (RTT, the time it takes for a packet to reach a destination and the return packet to get back) down.

In our example network as we described above, with two networks and an Internet connection we should, in other words, look at how large the two networks are. If we can consider them to be small and depending on what requirements the clients have, a couple of hundred clients should be no problem on a decent NAT machine. Otherwise, we could have split up the load over several machines by setting public IP's on smaller NAT machines, each handling their own smaller segment of the network and then let the traffic congregate over a specific routing only machine. This of course takes into consideration that you must have enough public IP's for all of your NAT machines, and that they are routed through your routing machine.

How to place proxies

Proxies are a general problem when it comes to NAT in most cases unfortunately, especially transparent proxies. Normal proxies should not cause too much trouble, but creating a transparent proxy is a dog to get to work, especially on larger networks. The first problem is that proxies take quite a lot of processing power, just the same as NAT does. To put both of these on the same machine is not advisable if you are going to handle large network traffic. The second problem is that if you NAT the source IP as well as the destination IP, the proxy will not be able to know what hosts to contact. E.g., which server is the client trying to contact? Since all that information is lost during the NAT translation since the packets can't contain that information as well if they are NAT'ed, it's a problem. Locally, this has been solved by adding the information in the internal data structures that are created for the packets, and hence proxies such as squid can get the information.

As you can see, the problem is that you don't have much of a choice if you are going to run a transparent proxy. There are, of course, possibilities, but they are not advisable really. One possibility is to create a proxy outside the firewall and create a routing entry that routes all web traffic through that machine, and then locally on the proxy machine NAT the packets to the proper ports for the proxy. This way, the information is preserved all the way to the proxy machine and is still available on it.

The second possibility is to simply create a proxy outside the firewall, and then block all webtraffic except the traffic going to the proxy. This way, you will force all users to actually use the proxy. It's a crude way of doing it, but it will hopefully work.

As a final step, we should bring all of this information together, and see how we would solve the NAT machine then. Let's take a look at a picture of the networks and how it looks. We have decided to put a proxy just outside the NAT/filtering machine as described above, but inside counting from the router. This area could be counted upon as an DMZ in a sense, with the NAT/filter machine being a router between the DMZ and the two company networks. You can see the exact layout we are discussing in the image below. 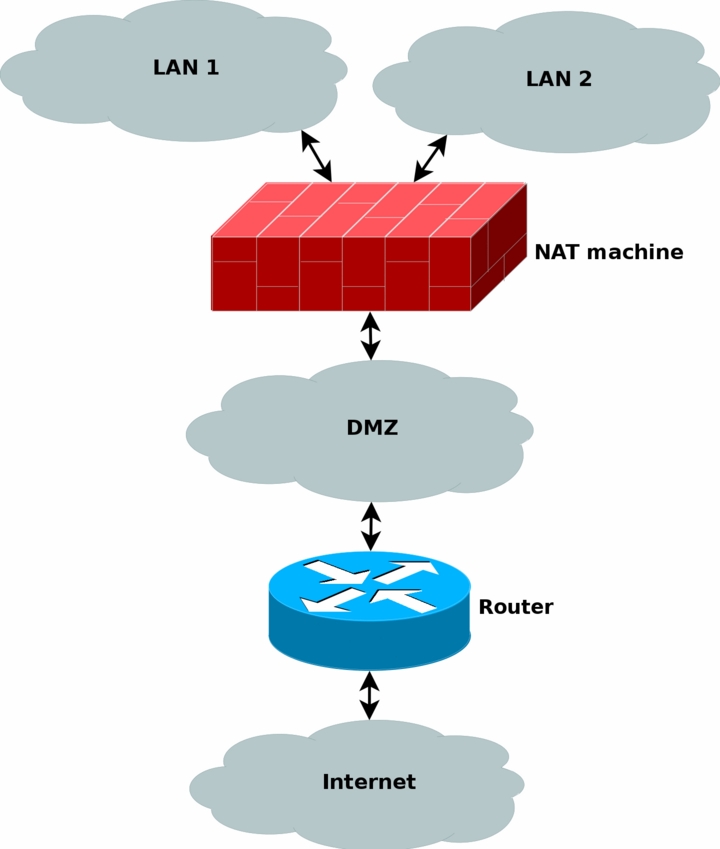 All the normal traffic from the NAT'ed networks will be sent through the DMZ directly to the router, which will send the traffic on out to the internet. Except, yes, you guessed it, webtraffic which is instead marked inside the netfilter part of the NAT machine, and then routed based on the mark and to the proxy machine. Let's take a look at what I am talking about. Say a http packet is seen by the NAT machine. The mangle table can then be used to mark the packet with a netfilter mark (also known as nfmark). Even later when we should route the packets to our router, we will be able to check for the nfmark within the routing tables, and based on this mark, we can choose to route the http packets to the proxy server. The proxy server will then do it's work on the packets. We will touch these subjects to some extent later on in the document, even though much of the routing based part is happening inside the advanced routing topics.

The NAT machine has a public IP available over the internet, as well as the router and any other machines that may be available on the Internet. All of the machines inside the NAT'ed networks will be using private IP's, hence saving both a lot of cash, and the Internet address space.