At the time of writing, the latest version of .NET CF is version 3.5. Following is a list of the various version names of the .NET CF and their corresponding version numbers:

As a developer, you can use either the C# or VB.NET language to write applications for the Windows Mobile platform. All the functionalities required by your applications can be satisfied by:

? The class libraries in the .NET CF, and/or

? APIs at the OS level via Platform Invoke (P/Invoke), and/or

You can determine the versions of the .NET Compact Framework currently installed on your Windows Mobile device by going to Start?File Explorer and launching the cgacutil.exe utility located in Windows.

Figure 18-4 shows the version of the .NET CF installed on a Windows Mobile emulator (more on this later). 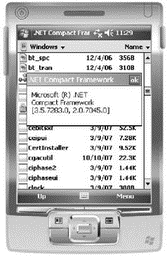