In this tutorial we'll learn how to load bitmaps from resources and from files, how to pass them around and blit them to the screen. We'll also see how to create and use an empty bitmap as a canvas, draw a picture on it and then blit it to the screen. Finally, we'll combine these techniques to write a simple program that uses double-buffering and timer messages to show a simple animation involving sprites.

First of all, in most cases Windows provides storage for bitmaps and takes care of the formatting of bits. The programmer gets access to the bitmap through a handle, whose type is HBITMAP. (Remember to set the STRICT flag when compiling windows programs, to make sure hbitmap is a distinct type, rather than just a pointer to void.)

Since a bitmap is a resource (in the Resource Management sense), the first step is to encapsulate it in a "strong pointer" type of interface. notice the transfer semantics of the constructor and the overloaded assignment operator, characteristic of a resource that can have only one owner at a time.

We instruct Windows to release the resources allocated to the bitmap by calling DeleteObject.

Now that the management issues are out of the way, we can concentrate on loading bitmaps. The simplest way to include a bitmap in your program is to add it to the resource file. In the resource editor of your development environment you can create new bitmaps or import them from external files. You can either give them names (strings) or numerical ids. When you want to access such a bitmap in your program you have to load it from the resources. Here are two methods that do just that. You have to give them a handle to the program instance.

Loading a bitmap directly from a file is also very simple and can be done using the same API, LoadImage. Remember, it will only work if the file is a Windows (or OS/2) bitmap — such files usually have the extension .bmp. There is no simple way of loading other types of graphics files, .gif, .jpg, .png, etc. You have to know their binary layout and decode them explicitly (there are other web sites that have this information).

Once you got hold of a bitmap, you may want to enquire about its dimensions. Here's how you do it.

Finally, you might want to create an empty bitmap and fill it with your own drawings programmatically. You have to specify the dimensions of the bitmap and you have to provide a device context (Canvas) for which the bitmap is targeted. Windows will create a different type of bitmap when your target is a monochrome monitor or printer, and different when it's a graphics card set to True Color. Windows will create a bitmap that is compatible with the target device.

How do you display the bitmap on screen? You have to blit it. Blit stands for "block bit transfer" or something like that. When you blit a bitmap, you have to specify a lot of parameters, so we'll just encapsulate the blitting request in a separate object, the blitter. This is a very handy object that sets the obvious defaults for blitting, but at the same time lets you override each and any of them.

The BlitTo method performs the transfer from the bitmap to the window (or printer) as described by its Canvas.

The API, BitBlt, transfers bits from one device to another. That's why we have to set up a fake source device. This "memory canvas" is based on the actual canvas--in this case we use target canvas as a template. So, for instance, if the target canvas describes a True Color device, our MemCanvas will also behave like a True Color device. In particular, when our bitmap is selected into it, it will be converted to True Color, even if initially it was a monochrome or a 256-color bitmap.

The simplest program that loads and displays a bitmap might look something like this: There is a View object that contains a bitmap (I assume that the file "picture.bmp" is located in the current directory). It blits it to screen in the Paint method.

A sprite is an animated bitmap that moves over some background. We already know how to display bitmaps — we could blit the background first and then blit the sprite bitmap over it. This will work as long as the sprite is rectangular. If you want to be more sophisticated and use a non-rectangular sprite, you need a mask.

The two pictures below are that of a sprite (my personal pug, Fanny) and its mask. The mask is a monochrome bitmap that has black areas where we want the sprite to be transparent. The sprite, on the other hand, must be white in these areas. What we want is to be able to see the background through these areas. 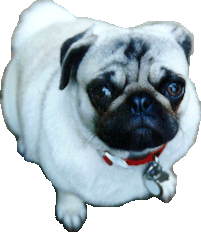 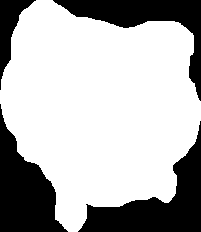 What remains is to implement the animation. The naive implementation would be to keep re-drawing the image: background, mask and sprite, changing the position of the mask and the sprite in each frame. The problem with this approach is that it results in unacceptable flutter. The trick with good animation is to prepare the whole picture off-line, as a single bitmap, and then blit it to screen in one quick step. This technique is called double buffering-the first buffer being the screen buffer, the second one-our bitmap.

We'll also use Windows timer to time the display of frames.

We'll put the timer in our Controller object and initialize it there.

Once set, the timer sends our program timer messages and we have to process them.

The Update method of View is the workhorse of our program. It creates the image in the buffer. We then call InvalidateRectangle to force the repaint of our window (the last parameter, FALSE, tells Windows not to clear the previous image — we don't want it to flash white before every frame).

Here's the class View, with the three bitmaps.

And here's the implementation of Update. We create a bitmap canvas in memory, making it compatible with the current display canvas. We blit the background image into it, then blit the mask and the sprite (notice the change of position for each frame). Finally, we transfer the complete bitmap into our buffer (overloaded assignment operator at work!).

For completeness, here's the definition of bitmap canvas. You draw directly on this canvas using standard canvas methods, like Line, Text, SetPixel, etc… Here we only blit bitmaps into it.

Now, if you want more speed, read about DirectDraw.