You can use threads to break up statements in your application into smaller chunks so that they can be executed in parallel. You could, for instance, use a separate thread to call the DoSomething() function in the preceding example and let the remaining of the code continue to execute.

Import the System.Threading namespace when using the Thread class.

Note that the thread is not started until you explicitly call the Start() method. When the Start() method is called, the DoSomething() function is called and control is immediately returned to the Main() function. Figure 10-2 shows the output of the example application. 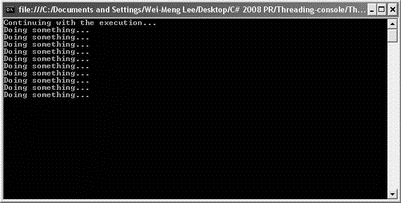 As shown in Figure 10-2, it just so happens that before the DoSomething() method gets the chance to execute, the main thread has proceeded to execute its next statements. Hence, the output shows the main thread executing before the DoSomething() method. In reality, both threads have an equal chance of executing, and one of the many possible outputs could be:

A thread executes until:

? It reaches the end of its life (method exits), or

? You prematurely kill (abort) it.