The right to free speech is not the right to speak for free. It is not the right to free access to television, or the right that people will not hate you for what you have to say. Strictly speaking — legally speaking — the right to free speech in the United States means the right to be free from punishment by the government in retaliation for at least some (probably most) speech. You cannot be jailed for criticizing the President, though you can be jailed for threatening him; you cannot be fined for promoting segregation, though you will be shunned if you do. You cannot be stopped from speaking in a public place, though you can be stopped from speaking with an FM transmitter. Speech in the United States is protected — in a complex, and at times convoluted, way — but its constitutional protection is a protection against the government.

Nevertheless, a constitutional account of free speech that thought only of government would be radically incomplete. Two societies could have the same “First Amendment” — the same protections against government’s wrath — but if within one dissenters are tolerated while in the other they are shunned, the two societies would be very different free-speech societies. More than government constrains speech, and more than government protects it. A complete account of this — and any — right must consider the full range of burdens and protections.

Consider, for example, the “rights” of the disabled to protection against discrimination as each of the four modalities of Chapter 7 construct them. The law protects the disabled. Social norms don’t. The market provides goods to help the disabled, but they bear the full cost of that help. And until the law intervened, architecture did little to help the disabled integrate into society (think about stairs). The net of these four modalities describes the protection, or “rights”, that in any particular context the disabled have. Law might intervene to strengthen that protection — for example, by regulating architectures so they better integrate the disabled. But for any given “right”, we can use this mix of modalities to describe how well (or not) that “right” is protected.

In the terms of Chapter 7, then, these are modalities of both regulation and protection. That is, they can function both as constraints on behavior and as protections against other constraints. The following figure captures the point. 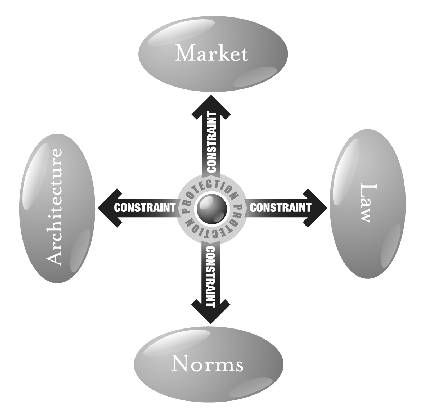 In the center is the object regulated — the pathetic dot from Chapter 7. Surrounding the individual now is a shield of protection, the net of law/norms/market/architecture that limits the constraints these modalities would otherwise place on the individual. I have not separated the four in the sphere of the shield because obviously there is no direct match between the modality of constraint and the modality of protection. When law as protector conflicts with law as constraint, constitutional law overrides ordinary law.

But that legal protection does not mean that I would suffer no consequences for promoting legalization of drugs. My hometown neighbors would be appalled at the idea, and some no doubt would shun me. Nor would the market necessarily support me. It is essentially impossible to buy time on television for a speech advocating such a reform. Television stations have the right to select their ads (within some limits); mine would most likely be deemed too controversial[1]. Stations also have the FCC — an active combatant in the war on drugs — looking over their shoulders. And even if I were permitted to advertise, I am not George Soros. I do not have millions to spend on such a campaign. I might manage a few off-hour spots on a local station, but I could not afford, for instance, a campaign on the networks during prime time.

Finally, architecture wouldn’t protect my speech very well either. In the United States at least, there are few places where you can stand before the public and address them about some matter of public import without most people thinking you a nut or a nuisance. There is no speakers’ corner in every city; most towns have no town meeting. “America offline”, in this sense, is very much like America Online — not designed to give individuals access to a wide audience to address public matters. Only professionals get to address Americans on public issues — politicians, scholars, celebrities, journalists, and activists, most of whom are confined to single issues. The rest of us have a choice — listen, or be dispatched to the gulag of social lunacy.

Thus, the effective protection for controversial speech is more conditional than a view of the law alone would suggest. Put differently, when more than law is reckoned, the right to be a dissenter is less protected than it could be.

Let’s take this example now to cyberspace. How is the “right” to promote the legalization of drugs in cyberspace protected? Here too, of course, the law protects my right of advocacy — at least in the United States. But it is quite possible that my speech would be illegal elsewhere and that perhaps I could be prosecuted for uttering such speech in cyberspace “in” another country. Speech promoting the Nazi Party, for example, is legal in the United States but not in Germany[2]. Uttering such speech in cyberspace may make one liable in German space as well.

The law therefore is an imperfect protection. Do norms help to protect speech? With the relative anonymity of cyberspace and its growing size, norms do not function well there. Even in cyberspaces where people know each other well, they are likely to be more tolerant of dissident views when they know (or believe, or hope) the dissident lives thousands of miles away.

The market also provides a major protection to speech in cyberspace — relative to real space, market constraints on speech in cyberspace are tiny. Recall how easily Jake Baker became a publisher, with a potential readership greater than the readership of all law books (like this one) published in the last decade. Look at the more than 50 million blogs that now enable millions to express their view of whatever. The low cost of publishing means publishing is no longer a barrier to speaking. As Eben Moglen asks, “Will there be an unpublished poet in the 21st Century?”

But on top of this list of protectors of speech in cyberspace is (once again) architecture. Relative anonymity, decentralized distribution, multiple points of access, no necessary tie to geography, no simple system to identify content, tools of encryption[3] — all these features and consequences of the Internet protocol make it difficult to control speech in cyberspace. The architecture of cyberspace is the real protector of speech there; it is the real “First Amendment in cyberspace”, and this First Amendment is no local ordinance[4].

Just think about what this means. For over 60 years the United States has been the exporter of a certain political ideology, at its core a conception of free speech. Many have criticized this conception: Some found it too extreme, others not extreme enough. Repressive regimes — China, North Korea — rejected it directly; tolerant regimes — France, Hungary — complained of cultural decay; egalitarian regimes — the Scandinavian countries — puzzled over how we could think of ourselves as free when only the rich can speak and pornography is repressed.

This debate has gone on at the political level for a long time. And yet, as if under cover of night, we have now wired these nations with an architecture of communication that builds within their borders a far stronger First Amendment than our ideology ever advanced. Nations wake up to find that their telephone lines are tools of free expression, that e-mail carries news of their repression far beyond their borders, that images are no longer the monopoly of state-run television stations but can be transmitted from a simple modem. We have exported to the world, through the architecture of the Internet, a First Amendment more extreme in code than our own First Amendment in law.

I say “politics” because this building is not over. As I have argued (over and over again), there is no single architecture for cyberspace; there is no given or necessary structure to its design. The first-generation Internet might well have breached walls of control. But there is no reason to believe that architects of the second generation will do so, or not to expect a second generation to rebuild control. There is no reason to think, in other words, that this initial flash of freedom will not be short-lived. And there is certainly no justification for acting as if it will not.

We can already see the beginnings of this reconstruction. The architecture is being remade to re-regulate what real-space architecture before made regulable. Already the Net is changing from free to controlled space.

Some of these steps to re-regulate are inevitable; some shift back is unavoidable. Before the change is complete, however, we must understand the freedoms the Net now provides and determine which freedoms we mean to preserve.

And not just preserve. The architecture of the Internet, as it is right now, is perhaps the most important model of free speech since the founding. This model has implications far beyond e-mail and web pages. Two hundred years after the framers ratified the Constitution, the Net has taught us what the First Amendment means. If we take this meaning seriously, then the First Amendment will require a fairly radical restructuring of the architectures of speech off the Net as well[5].

But all of that is getting ahead of the story. In the balance of this chapter, I address four distinct free speech in cyberspace questions. With each, I want to consider how “free speech” is regulated.

These stories do not all have the same constitutional significance. But they all illustrate the dynamic at the core of the argument of this book — how technology interacts with law to create policy.